First comes the drought, the heartbreak, the dust storms and paddocks with desiccated crops. Then comes the rain, the hope, the great blue-black mountains of clouds, deluge, creeks and gullies running as red as blood. Families look out of farmhouse windows while scones are cooking. Overnight moods have changed. Machinery rolls when paddocks are dry enough to work, tilling the soil, planting crop. Acres of green shoots rising to the sun, waving oceans of golden grain heads, harvesting machinery, trucks roll, efficiency is everything with bulk haulage trailers hauling grain to storage centres, to wharves for export, and the farmer’s bank account is once again healthy. This is the boom bust cycle to which Australian producers have to adapt. There are no promises, no guarantees with the climate of our great red continent.

And then as grain ripens, silos fill, and another cycle of Australian rural life raises its little rodent head. The mice come. Not just scattered little families of these rodents, but the rich bounty of harvest after droughts bring millions upon millions of the little grey critters. You can call the plague nature refilling ecological vacuums but on the land there is only one description that counts and that is they are a pain in the proverbial. And a pain in the bank account. The mice plague costs farmers hard cash.

The mouse outbreak has followed the rain, the change of seasons and the grain crops throughout much of regional Australia, this year from the Darling Downs of Queensland through New South Wales and Victoria to the Mallee country in eastern South Australia.

According to growers, the mice have ravaged farms on the Darling Downs in Queensland costing an estimated damages bill of tens of thousands of dollars in lost crops and equipment damage. Crops of sorghum, corn and cotton came under attack by the armies of minuscule mammals.

In New South Wales the plague has been reported from Merriwa in the Upper Hunter, Tamworth, Moree and the farms and towns of the New England region.

Australia’s mice plagues are a matter of record. The worst recorded mice plague occurred in 1993 in NSW with an estimated cost of $96 million. Another plague in 2010/11 brought a multi-million cost to farmers with the mice plague covering an area of three million square kilometres.

The breeding cycle of mice presents incredible biological mathematics. A mouse is born. Six weeks later is grown and females are pregnant with their first litter. Twenty one days of gestation to birth and then another six weeks later a new generation is grown and breeding. According to the CSIRO, when a breeding pair of mice emerge after laying low through the drought and the rain, they can produce an extended total of 500 offspring in a season. With this year’s explosion of numbers, country towns are running drastically short of mouse baits and traps as farmers battle the onslaught.

From Western NSW, truckies are seeing the invasion of the rodents first hand. Grain haulage truck drivers describe ‘waves of movement’ across the road in grain producing regions.

The cycles of mouse plagues following the seasons are part of Australian regional life and one of the burdens of grain growers and townships across the nation. In towns, mice raid houses. Cats and dogs who declare war on the little rodents with great enthusiasm soon tire of the game and just stare at mice as they run across the lounge room floor. Stories prevail of children screaming in the night as mice run across their beds.

With mice devastating farmers’ incomes since the 1800s, there has been considerable scientific research carried out including, in 2021, the use of drones to distribute mouse baits over cropping areas.

CSIRO has been working on the problem of plague mice for decades. With the help of social media, CSIRO scientists are calling on ‘citizen science’ to observe and report on mouse activity. The MouseAlert app has been developed and the researchers are asking Australian farmers to identify population ‘hot spots’ to assist in predicting outbreaks early in the cycle, allowing immediate control measures.

Yet even as the mice plague makes life difficult for grain growers, the harvesters rumble night and day and the golden grains are hauled to distribution points across Australia. As the 2020 winter plantings of wheat, oats and barley are harvested, the same harvesters are already working on the summer crops of sorghum and oil seeds.

The trucks, as did the harvesters, work around the clock and after years of drought, trailers are still in short supply.

At the forefront of meeting the national need for equipment, MaxiTRANS supplies a wide range of bulk haulage solutions to meet the needs of farmers and transport companies. 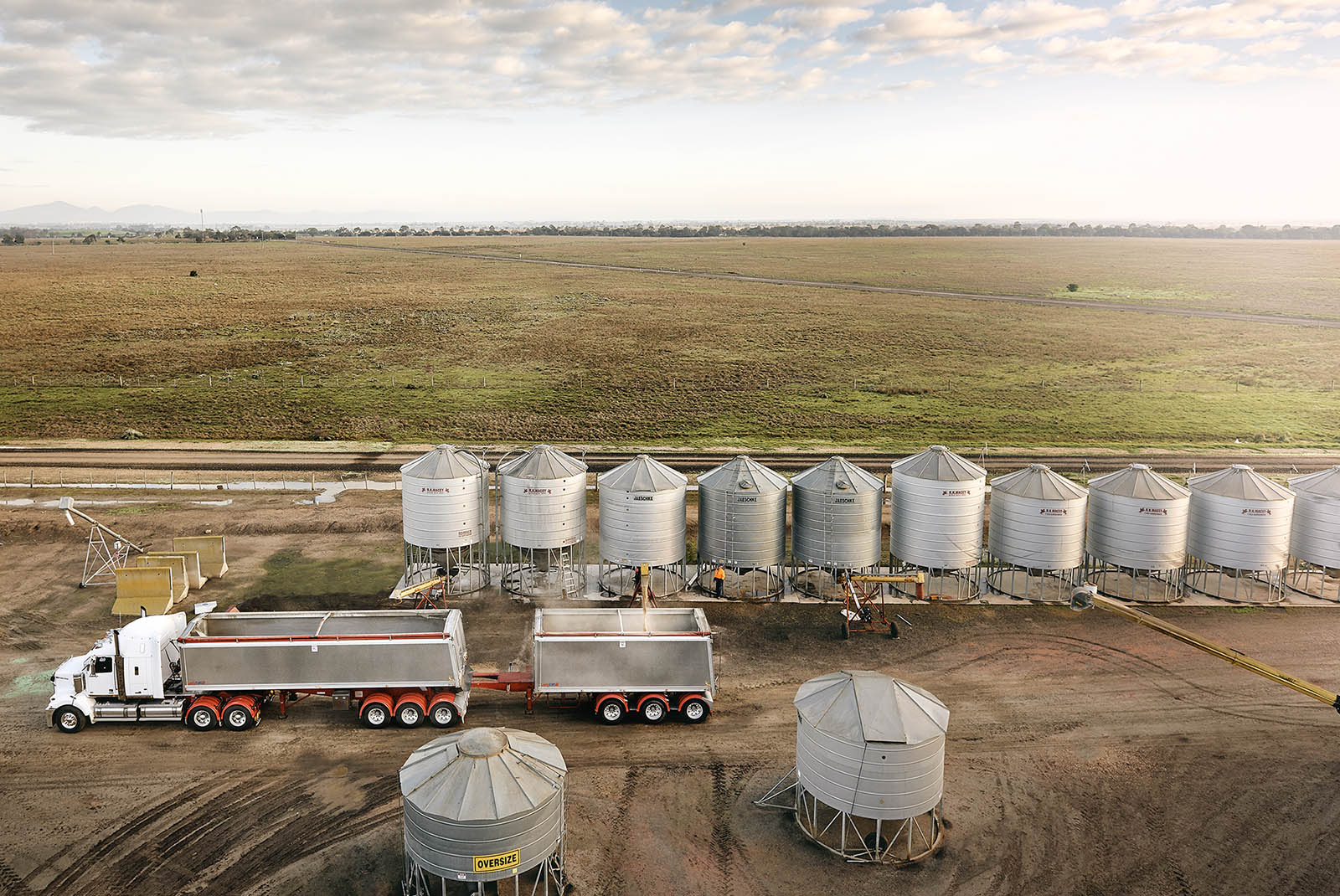 Lusty EMS provides a wide range of tipper bulk haulage solutions from the ever popular and versatile semi-tipper available in modules suitable for single trailer work or B-Double combinations, through the Stag B-Double combos that preclude the requirement of having to unhook to unload.

As is the way in the boom / bust cycle of the Australian climate, widespread heavy rain arrived in 2020 and famers, in spite of the mice plague, supply grain to meet the needs of the world and bring export dollars to our embattled COVID economy.