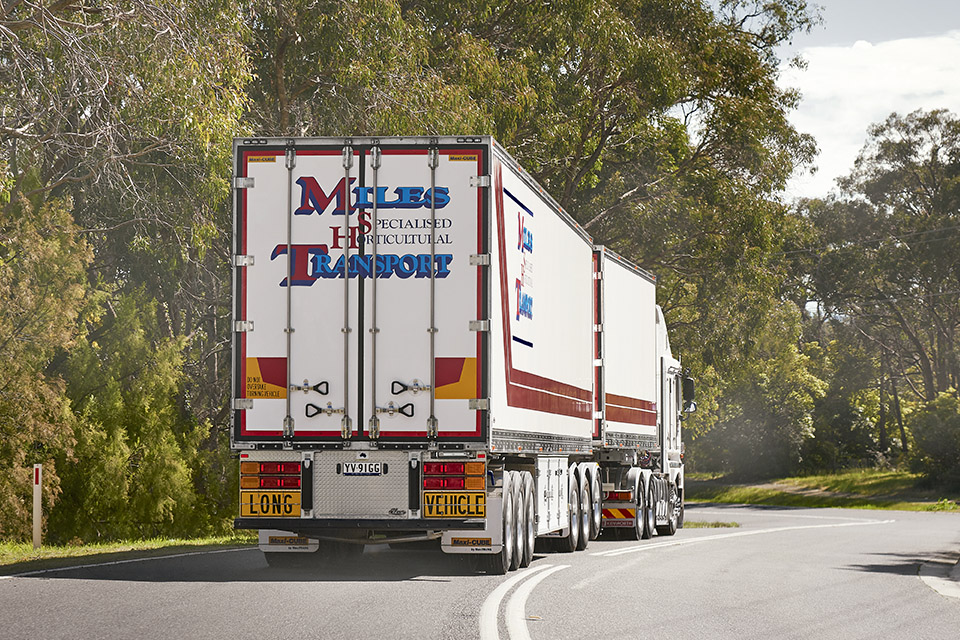 The company still operates out of its depot in Monbulk in Victoria’s scenic Dandenong Ranges, although the size of the depot has expanded fairly from its first set up.

When Nick established the company he had just one International prime mover and a trailer that he purchased through his old employer. From those humble beginnings the company has come a long way to now owning 12 trucks, mainly Kenworth with a couple of European makes in the mix, and 13 trailers, 12 of which are from MaxiTRANS.

The latest B-double replaces the first similar set Miles Transport bought in 2009. There have been many improvements on the Maxi-CUBE Classic Vans since then. For instance, the new Hi-CUBE van provide superior thermal efficiency – capable of maintaining temperatures to minus 18 degrees celsius. What’s more, the inclusion of a full length chassis, as well as a reinforced floor and rear frame, offers greater strength and durability without impacting on tare weight. A key feature of the Maxi-CUBE Hi-CUBE van is its thinner side walls, floor and roof that helps optimise cubic capacity, useful for when the load is slightly over standard pallet size.

“The quality of MaxiTRANS trailers is second to none. They are constantly working to better the product and as a result, with every new trailer there has been an improvement,” Geoff says. “Refrigeration is always a key consideration in the construction of these trailers,” he says. “Freezer burn can damage fragile goods such as freshly cut flowers. The design of chutes from the fridge plays a big role in the even distribution of air within the trailer. “This feature also comes in handy for storage and transport of other perishables such as fresh strawberries and other local produce that we also cart,” he says.